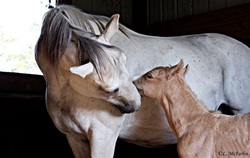 Photo credit : Leah McFarlin
Jasmine aka Mischka (her show name ) and Jockey Club name Silver Dancer
Her first foal, Tigress CFP , by Telynau Braveheart was Reserve Champpion at her NASPR Inspection.
Tiggy was sold as a yearling to a prominent breeder of Welsh ponies that was starting a sport pony program.
Second foal, Fernview Mister Cool aka Charlie by Menai Mister Mostyn was sold as a 3yr old to the farm where he was sent to be started. They campaigned him lightly in Hunter in Hand  (4th USEF  3yr old  Hunter Pony Breeding 210 Region 4) and  Young Hunter classes in 2011. He was Year End Reserve Champion at Horse Show in the Park series. We had the opportunity to buy him back towards the end of 2011 and started his Dressage basics. He was sold in 2012 to a fabulous young lady who will be showing him in Dressage

Our beautiful Palomino colt born in 2011 was sadly lost at birth. We decided to breed back to the stallion, BF Oliver Twist for a 2012.
Almost a replica of his brother, Fernview Mr Bentley was born on May 4th 2012.
What can I say about Bentley? I think his photographs say it best! Click on his name above to go to his page!